The effect of dynamic human tRNAomes on translation efficiency

tRNAs are short, abundant molecules responsible for decoding 3-letter combinations of nucleotides (codons) into the corresponding amino acid during the process of mRNA translation. The complete set of tRNAs in the cell comprises the “tRNAome”, which is regulated by three main processes: tRNA expression, modification, and aminoacylation. While tRNAs are often regarded as a mere static element of translation, many studies have highlighted the potential dynamic nature of the tRNAome in different tissues and conditions. As tRNA anticodons are responsible for recognizing codons during mRNA translation, these changes could alter the amount or quality of the protein synthesized from an mRNA transcript. This is because the genetic code is degenerate: there are 61 codons for the 20 canonical amino acids, which means that multiple “synonymous” codons can specify the same amino acid. However, synonymous codons are often recognized by different tRNAs. Since synonymous codons are also not uniformly distributed across the human genome, a.k.a. “codon bias”, different sets of genes enriched with certain types of codons could be more favorably expressed whenever their cognate tRNA anticodons are available in higher or lower levels in cells. To this end, we apply systems biology approaches to elucidate the role of tRNAomes in determining changes of mRNA translation efficiency across human tissues and diseases. 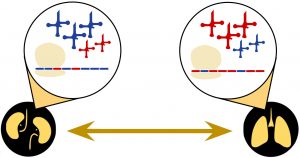 Most human genes are fragmented into introns and exons. Depending on the circumstances, the cell “decides” what combination of exons to use through the activity of splicing factors. The regulation of splicing is crucial as it affects essential molecular events such as mRNA stability, translation, or protein-protein interactions. In our laboratory, we are interested in studying the regulation of this biological process in disease towards the development of new treatments. Specifically, we are focusing our efforts on improving our understanding of the role of alternative splicing both in cancer and retinal diseases.

Despite the therapeutic potential of targeting alternative splicing to treat cancer, we still lack approaches to pinpoint how this fundamental biological process is hijacked to promote tumor progression. While therapies based on targeting splicing events have been developed to treat cancer, our current understanding of this process does not allow the systematic prioritization of potential disease-driver splicing targets yet. A branch of our research focuses on leveraging computational approaches to study the interplay between RNA splicing and cancer from a systems perspective to improve cancer treatments.

Retinal degeneration associated with photoreceptor death represents a major source of blindness worldwide. Photoreceptors are known to have unique functional properties, sculpted to a large extent by alternative splicing. In recent years, increasing efforts have been made to understand the intricacies of the photoreceptor-specific transcriptome. Our team is performing a comprehensive characterization of retinal and photoreceptor-specific Alternative splicing in vertebrates with the ultimate aim of improving treatments for retinal degeneration. 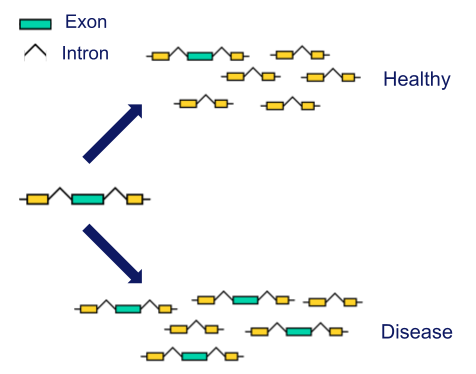 Cytokines are a group of intercellular signaling proteins that control and orchestrate the proper functioning of the immune system. Nowadays, engineered cytokines have been proven to correct some immune-driven diseases. However, many cytokines like IL-10 show both pro-inflammatory and anti-inflammatory properties. The complex interplay between cytokines and the immune system hinders the development of drugs exploiting this interaction.

To help solve this problem, we developed a transcriptomics-based mathematical model of IL-10 signaling. By integrating the key molecular players in cytokine signaling and extensively calibrating our models with experimental data, we are able to capture the difference in cytokine signaling plasticity observed between different cell types. In addition, we are aiming for a modeling-driven engineering of IL-10 mutants directed at the treatment of immune disorders.